By Meagan on 20th May 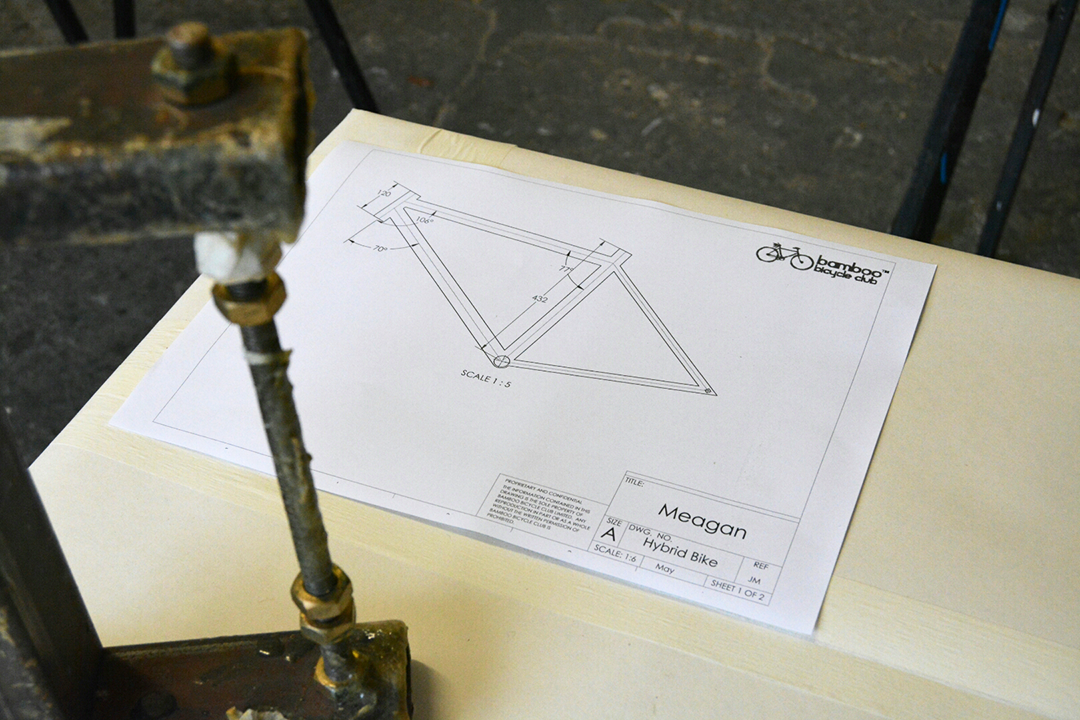 The one thing I’ve been wanting to do since moving to the new office is build a bamboo bicycle. James, our neighbour and Alex and Frank’s brother, runs a workshop where you can build a custom bicycle made out of bamboo, the Bamboo Bicycle Club, and this past weekend, I finally got to build one.

Anyone who knows me knows that I like to think I’m a fairly crafty person. I like sewing, crafts, and just making things in general, but there was something about building a bicycle that made me a bit nervous. I mean, others’ came out wonderful and I see Annabel’s every day when I come into the office, but I was making this and I was riding it. What if I messed up? What if I didn’t bind it well enough? What if I was just bad at building things?

Saturday morning. 8 am. I walk into the yard as I usually would for work, then it hits me. I’m building a bike today. Suddenly I got nervous and excited all at the same time, but I tried my best to contain myself as I sat talking to James waiting on the others to arrive. 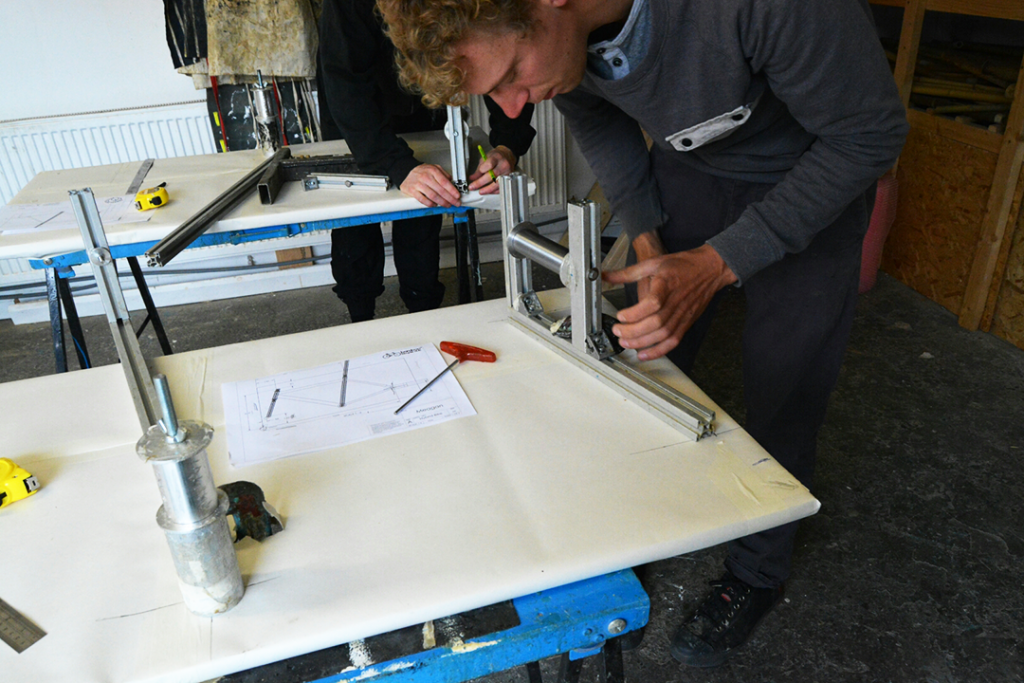 There were only three of us this session, which I figured was a good thing; I’d get more attention and for sure couldn’t mess anything up too badly. The first thing we had to do was set up the jig. Basically, there’s a table you’ll be working on for the weekend and these metal bits that you have to attach to it according to your measurements. From there, you pick out your bamboo.

Picking out the bamboo was honestly the hardest part of the whole process besides cutting, I must say. Well, just picking out the seat tube. So you have to find the right size opening in the top of the bamboo just large enough to fit a metal tube that’s going to eventually hold your bike seat, but still aesthetically pleasing with no splits and is either the right length or can be cut down. Yes. It was that extensive. Everything else was pretty straightforward; if the colour matches and if it is the right size, you’re fine. 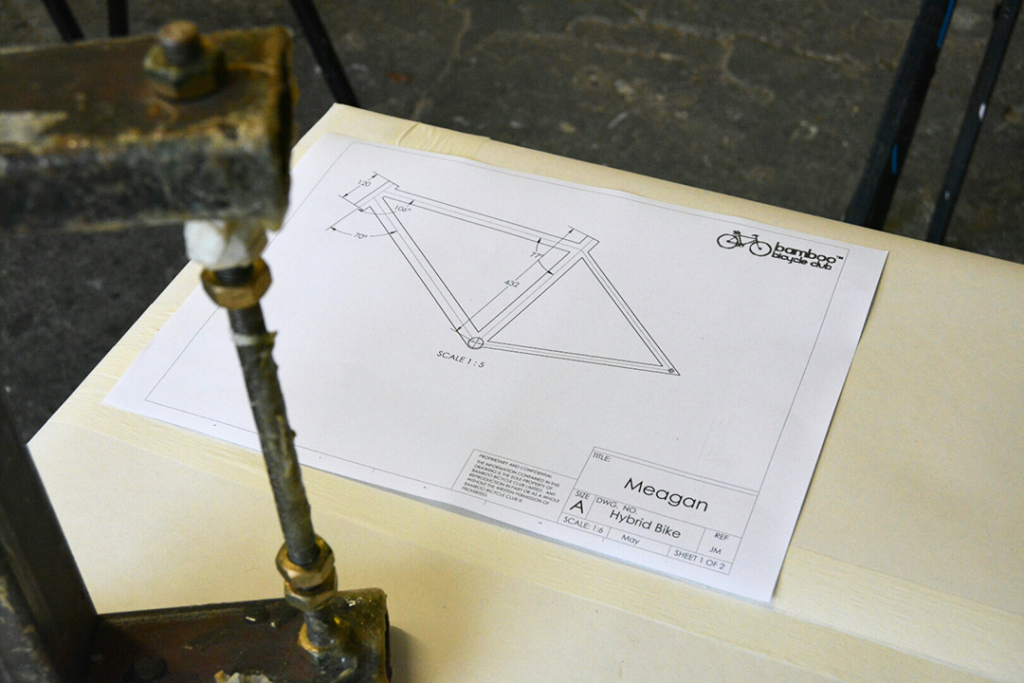 The next step was measuring and cutting. Marking the measurements was fine, but then it was time to cut. “How good are you at sawing, Meagan?” James asked me first. I glanced at the sawing station and thought about it. I’ve never really sawed anything before, and I’m pretty sure trying to figure out how to cut PVC pipe with a steak knife in your kitchen doesn’t count. So I replied confidently, “I have no idea!” I ended up learning that I’m pretty bad at sawing bamboo, or any wood in general. By pretty bad, I mean really bad. On the bright side though, there wasn’t too much…as long as your bamboo didn’t split like my chainstays did. Let’s just say I’ve gotten pretty good at cutting slits in bamboo.

One of the most fun parts that day was scraping the ends of the stalks. Bamboo has a natural waxy layer that tends to repel the glue we used, so we spent a bit of time sitting outside scraping the tips of the bamboo to peel away that layer. I felt like I was whittling away, making a spoon or something out of the bamboo.

There was the slight fear that I’d take off a finger or peel too much off the pieces and end up weakening the bamboo. But it’s a really strong material, my fingers are still intact, and no matter how many shavings I took off (reasonably, of course), the strength didn’t change. After that, we glued the bamboo to the metal bits, clamped them down, and gave it a night to dry.

Today I learned how to saw and that power drills are super fun. @BambooBicycle #bamboobike pic.twitter.com/zcne3upFDd

Sunday morning, we were supposed to be there at 9. I say supposed to because I ended up late due to the overground not running for at least 30 minutes by the time I got to Stratford. James was kind enough to get me so I didn’t have to walk (and I wished I had the bike I was building finished).

We started finishing the bikes on Sunday, gluing and wrapping hemp around the joints. It was by far my favourite part; it felt like I was doing arts and crafts, except I’d be riding the craft around later.

We spend a couple hours gluing and wrapping and covering the bindings in electric tape to make the glue really set in, then had to wait a bit for it to dry, so we went out for lunch and came back to check on the joints. Mine was still a bit sticky, but I wasn’t really in a rush. I’d be back Monday for work, so I figured I’d check on it again then. 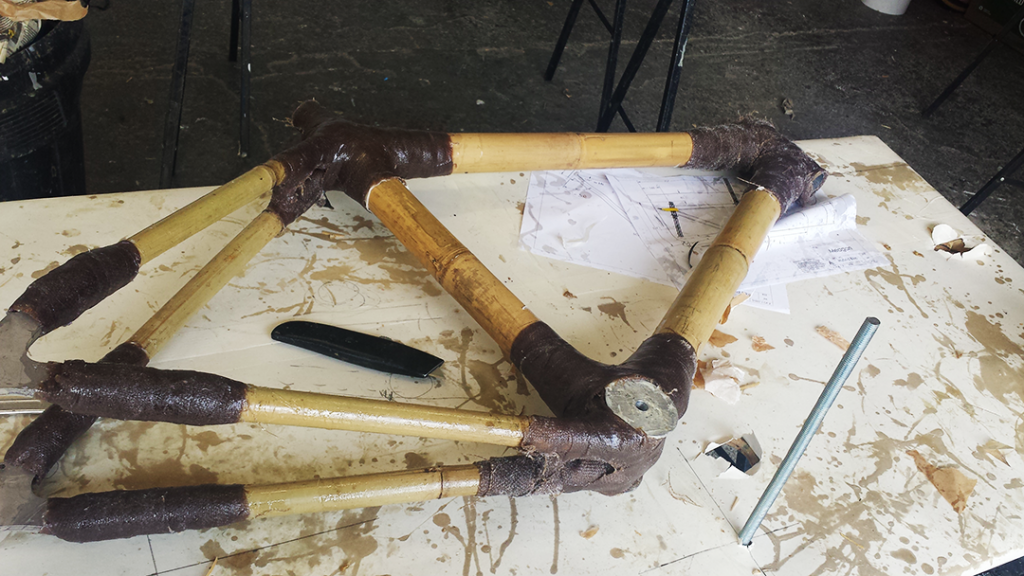 Regardless, we took everything off of the jigs and left them to dry overnight. And now, it’s time to sand and stain my frame.

Update: I’m back in the office and was told we were having a slight issue with the glue on my bike. No worries though, it’s easily fixed. So as soon as that’s taken care of, I’ll get right on finishing the frame.

To see finished bikes or to order a kit from the Bamboo Bicycle Club, check out the website here.